How to wear a scarf

There are different ways to tie a scarf. You can divide the knitted accessoire in two halves. Then you put the scarf in the neck and the two ends can hang down in front of you. The open end is then pushed through the closed side, and tightens the knot.

To tie a scarf, is also "no node" variation quite popular. It puts you in front of the scarf at the neck, and throws both ends to the back of the shoulders. One end is then carried out on the other side to the front, so that one end of the scarf hanging down the back, the other end of the front.
To cheer on his favorite team, you can wear the scarf as a fan, of course, also at one or both wrists. For this, the scarf or scarves with a single or a double knot is attached to the wrist. Advantage is that you have your hands free, can easily blow into a whistle, wave a flag or wear the scarf next to another other fan articles. 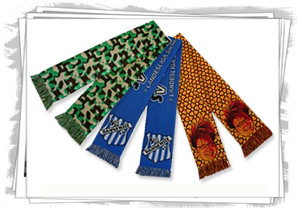 Tie a scarf in different variations

But not enough, here it is another variant with which you can wear a tie or scarf: fold the scarf in width and twice around the neck. The end should be somewhat longer than the other. At the longer end at chest level best to prevent a simple, loose knot. The shorter end, you can then pull from the top through the node. The two ends can be each the same length as desired at both ends or wear of different lengths.

That football scarf for every football fan is a Fan, is probably known by now. Because nearly every fan has a scarf of his favorite clubs hanging in the closet at home or in the cloakroom. The scarves are enjoying worldwide popularity, not only in Germany. Recent studies have shown that nearly three quarters of the trailer have a scarf of their team. Thus, these together with the knitted Halswärer jerseys, which can also be customized, the most popular Fan merchandise.

How to wash a football scarf

The scarf can be washed without problems. We recommend either hand wash or gentle machine wash, for example with a wool program. The scarf is not made of wool, but made of soft acrylic. Through the laundry with a gentle program is ensured that the material is not stressed too strongly.

Measured by the price of a jersey scarf is almost a bargain. A scarf from a premier league club, you get for about 15 Euro. The jersey the other hand, usually costs about 50 euros. In addition, the scarf is variably used: the stadium suitability of scarves has been proven a million times: holding up during running of the clubs can, circling in front of a corner kick, when singing the national anthem, etc.
To whom it pleases, can bind to several scarves wrists, or, having won the championship at the motorcade like a fox tail on the antenna. Besides protecting the scarf wrapped around his neck, of course in the fall and winter from cold and frost. The possibilities of a football scarves are versatile. Because of this Merchandise can be knitted individually as a single piece, it's the perfect gift idea for football fans.